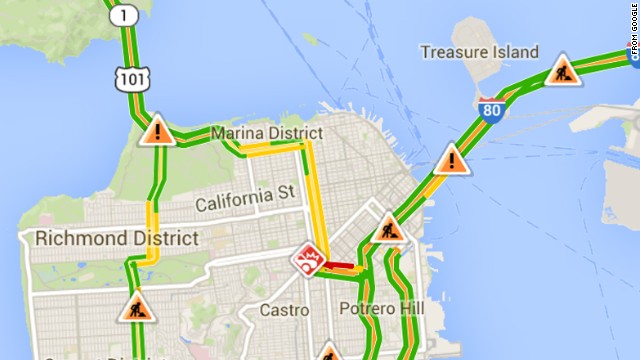 Google is adding real-time info about accidents and traffic jams to its mobile maps. Note the red icon near the Castro district.
STORY HIGHLIGHTS

Google announced Tuesday that its mobile maps will now include real-time updates about accidents, construction and other potential sources of traffic snarls. The information will come from the 50 million users of Waze, the social-mapping app that Google bought in June for $1.1 billion.

Google Maps already had some real-time traffic data from third-party providers and by pinpointing Android users' GPS signals to estimate congestion on highways. But now that data will be bolstered by reports from actual drivers on the roads.

Israeli startup Waze has built a vast network of motorists who crowdsource such data as commuter routes and road closures to help each other outsmart traffic jams in more than a dozen countries. Frequent users can even earn badges and real-world prizes.

What's Waze, and why did Google buy it?

Waze won an award for Best Overall Mobile App award at the 2013 Mobile World Congress. Apple and Facebookwere reportedly interested in buying the company before Google snapped it up.

Starting Tuesday, Waze users' reports on road conditions will appear on the Google Maps app for Android and iOS in the United States as well as Argentina, Brazil, Chile, Colombia, Ecuador, France, Germany, Mexico, Panama, Peru, Switzerland and the UK.

Users of Waze apps will now benefit from Google services as well. The Android and iOS versions of Waze have been updated with Google Search to help users find local businesses and landmarks. And Waze's crowdsourced Map Editor now includes Google Street View and satellite imagery.