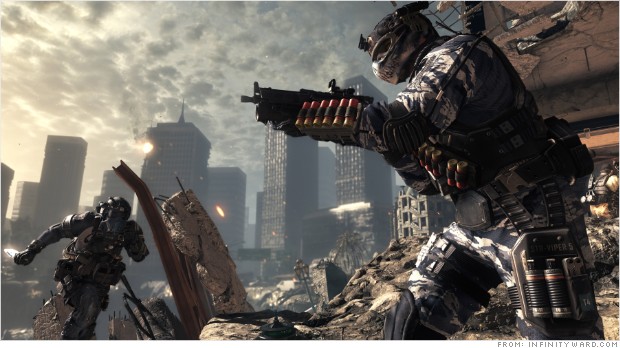 With "Call of Duty: Ghosts," video game giant Activision Blizzard appears to have yet another blockbuster on its hands.

The latest edition of the wildly successful global franchise is set to launch Nov. 5. "Call of Duty: Ghosts" introduces a brand new storyline and cast of characters to the franchise, marking the first time that users will play as an underdog -- where the enemy is the super power.

"It's ... the first time you're playing with the same band of brothers from the beginning to the end of the game, which is going to provide a richer and more relevant storyline to the campaign," said Eric Hirshberg, CEO of Activision's publishing division, in an interview with CNNMoney.

Hirshberg said the latest Call of Duty game sports the best graphics, textures and atmospheres of the franchise. In keeping with the mainstream appeal of Call of Duty, the game's developer, Infinity Ward, has worked closely with Hollywood on the campaign's story. Stephen Gaghan, who wrote and directed Syriana, was called in to help with the storyline of Call of Duty: Ghosts.

Related story: 'Call of Duty' heads to China, but who will be the enemy?

Call of Duty has become one of the most successful games in history, producing sales of $8 billion worldwide over the past decade. Activision has sold a total of 100 million Call of Duty games, according to Michael Pachter, video game analyst for Wedbush Securities.

Activision (ATVI) timed the release of "Call of Duty: Ghosts" with the launches of Sony's(SNE) PlayStation 4 and Microsoft's (MSFT, Fortune 500) Xbox One devices. But Activision will also release the game for the struggling Nintendo Wii U console, even as rivals Electronic Arts (EA), Take-Two Interactive (TTWO) and Bethesda Softworks have abandoned it. In fact, Activision has pledged to bring its full slate of games to the Wii U platform.

Hirshberg said Activision has always benefited from being a platform agnostic company, and he believes it's better for the game industry as a whole if there are more viable video game platforms.

"If our Ghosts can help increase the appeal of the Wii U, then that's something we absolutely want to do," Hirshberg added.

Hirshberg believes that games for the next generation of video game consoles will enhance the connection between players and virtual characters. He claimed that Ghosts will provide the "hair-on-fire, rollercoaster ride of adrenaline that Call of Duty seems to be able to deliver better than anyone."

Wedbush's Pachter predicted that Activision has produced a hit in "Call of Duty: Ghosts," forecasting the publisher will sell 20 million games. After users download an additional 25 million units of extra in-game content, he predicts sales will come in well over $1 billion.